Hasbro recently released the Star Wars Black Series Darth Vader from Episode 3. It’s a really nice figure and probably the best Darth Vader figure yet, but there is still room for improvement. Until that time comes where we get the perfect figure, I’ve made some minor adjustments to the figure to meet my needs and wants. Thankfully, it didn’t require too much work and didn’t change how the figure operates so it’s a win-win for me.

We’re coming upon 20 years of the current Kenner/Hasbro offerings so they’ve made a ton of Vader figures. I’ve lost count but with each rendition, things seem to improve. I think they’re very close to making it if this Episode 3 version is any indication. It has all the articulation you’d want, a great helmet, and a nicely proportioned body. It’s my hope they release an Episode 5 or 6 version with the same articulation points and type, but a little beefier to match the build of David Prowse. 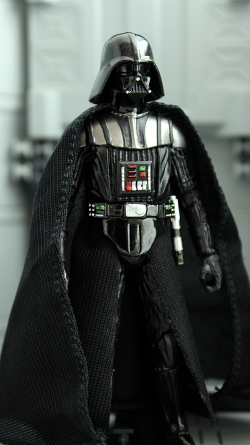 The Episode 3 Vader is a bit on the skinny side which is more in line with Hayden Christiansen. It’s not exactly the most intimidating Vader figure, but the sculpt is just really well done. The detail in the armor is pretty good considering the smaller scale and it just makes me wonder how the small figure is so much better than the larger 6″ figure recently released. I’m really happy the sculpted the robe on the torso because then it doesn’t inhibit the articulation or sculpt like the previous versions that incorporated more soft goods.

The helmet is also noticeably different and accurate to the Episode 3 helmet. To the casual viewer, there isn’t much difference, but if you watch some of the behind the scenes footage the helmet is quite different. For one, unlike the original helmet, it’s symmetrical using modern technology while the original was fully sculpted by hand. I also thing the shape and angles are ever so slightly different. I’m probably in the minority when I say I actually prefer the symmetrical Episode 3 helmet. While the recent figures had some nice helmets, there was just something that always nagged at me but I’m quite happy now. The only issue I have with it is that they don’t seem to be removed from the molds too well resulting in a lit of scuffing and marks. I will probably have to polish it.

Another nice thing about this figure is the uses of ball joints for the head and torso. This allows the figure to have a lot of movement that other Vader figures could not achieve. The figure integrity is weak as the head and torso seem to pop off the joints easily, but it still gives the figure flexibility not seen before. The wrists are also ball-hinge joints which we’ve never had for Vader before. This allows him to do some two-handed saber poses much easier than before.

While the figure is really nice, I had to fix two items that were bothering me. As others have noted, the skirt piece used is much too large. It’s a lighter material and billows well in the wind, but it’s just too big that it doesn’t look good at all. Instead, I used the skirt piece from the Episode IV Vintage Collection Darth Vader. It’s the best hemmed skirt piece because the figure is very similar in that it uses the ball-legs and is roughly the same height. It looks much better in my opinion and still allows Vader a great range of motion in the legs.

The second modification I made was to drill a hole in the belt to allow Vader to carry the lightsaber hilt. It seems only the Vintage Trilogy Collection Vader was the only one to have the hole. Every Vader figure since never had one and I always had to drill a hole. I think it makes the figure better and is more in line with the rest of the Jedi figures.

Overall I’m happy I didn’t really have to do too much to make this figure better. Hopefully Hasbro will finally release the be-all-end-all Darth Vader action figure. 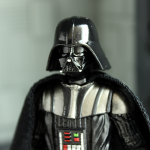 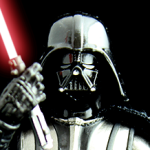