Sometimes a toy company can destroy a really great character, and Mattel seems to do that more often than other companies. It’s even worse when that character is from your own internal brand. The company says they will or won’t do something, contradict themselves, and then take a crap all over it. They truly believe you will love it, and then when it fails to impress, they try to justify their actions. The Sorceress of Castle Grayskull is an extremely important character, and Mattel has truly pooped on her three times. It hurts even more so when it’s a character you really like.

I always felt there was lost potential in the character. Filmation just made her a complete weakling, MYP made her powerful but had no personality, and Mattel pretty much gave her the shaft which to this day I cannot figure out why. Their first incarnation looked weak and lacked any kind of effort. I had it, and loved it only because it was the only representation of her. Mattel had another shot at her for the 200X line, but decided not to produce her even though her character was much more central to the stories. Somehow they though Disco Skeletor was in higher demand. Finally, MOTU Classics was supposed to right the ship, but sadly, the figure fell flat on what could have been a fantastic figure.

From a representative perspective, she looks just like the Filmation version which the majority of fans love. The head is beautiful and is exactly how she should be unlike the vintage figure. The body is elegant for a simple design, yet it radiates someone powerful and magical. And that’s where it ends. 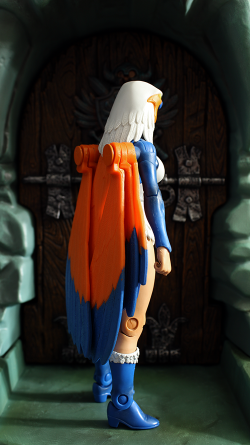 The biggest gaffe is the most obvious of reasons. It’s those stupid “drums” on her shoulders. Mattel kept saying ‘action features’ were out of the question, even for those figures where it essentially defined the character. Examples would be a water spray for Kobra Khan, spring-loaded legs for Ram Man, or spring-loaded arms for Fisto and Jitsu. And yet, when the Sorceress came about, they decided to stupidly create a feature that would allow the wings to spread out when her arms rose. Biggest failure? Appearance! They just look horrible. I’ll let the pictures speak for themselves.

I write this entry in 2015, years after the figure has been released, but i look at the recently released Queen Angella and her wings are pretty darn good. Are you telling me that nobody could have done the same thing for the Sorceress only a few years ago? Give me a break.

Secondly, it doesn’t even work like it should. It goes up and down more or less, but it’s still flawed and is really more a pain. I would say if they were going to contradict themselves, they should have gone with soft-goods for the wings. And it would’ve addressed the third point.

She can barely use her arms. Since the pivot point is at the shoulders, when her arms move up, so do the wings. Nobody in QC that this was a bad idea? It looks so stupid! Had the used soft-goods and tied them to the wrists, everything would have worked. The concept worked just fine for the vintage Silver Hawks figures.

There are so many other possibilities that could have made it better. Why not place the pivot points on the shoulder blades instead? If you didn’t want soft-goods, why not an accordion-style wings? Why not ball joints? The probably reason why they didn’t is simple. They’re too lazy. If every figure had an action feature, then it would’ve been easily accepted, but they kept preaching these were adult collectibles and then promptly took a dump in our faces.

The rest of the figure is ok, but the pin ankles don’t help her much since she has heels. She can’t really sit either so she’s really only going to have a few different poses.

She comes with a staff that’s done in a really nice and luminescent white staff.

Overall, I’m very disappointed with the figure and it breaks my heart knowing what could have been. It’s too bad I’m not much of a tailor or else I would make myself a soft-goods feather cape for her. She really deserves a 2.0 version instead of giving me the stupid Star Sisters. 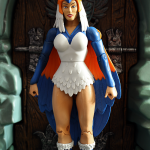 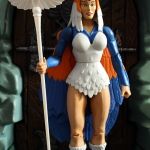 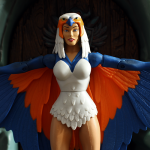 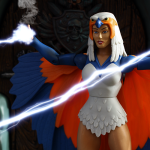 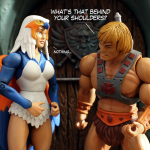 Posted in Heroic Warriors, Masters of the Universe, Proof of Purchase | Tagged Mattel