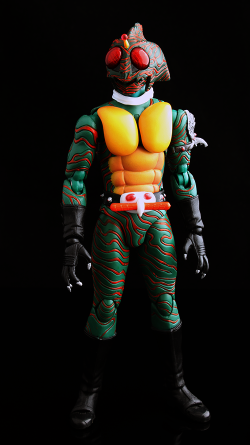 I never got to watch Kamen Rider Amazon until I lived in Japan in 2004-2005. A friend of mine was kind enough to let me see the series and it was strange to watch to say the least. He’s not my favorite Kamen Rider, and feels like the odd man out a lot of times. This might be because unlike his predecessors, his motif is of a piranha and not of a bug. He’s very interesting indeed.

I have to say the series was a bit of a head scratcher, and it can’t just be me because the series was substantially shorter than the others. By a lot. When I watched the first few episodes, I felt bad for the actor who had to portray a caveman like character. He just missed out on being Kamen Rider X! I suppose the writing staff became really frustrated because by the 4th or so episode, he had become fluent in Japanese.

Having this Amazon design allowed for some pretty outrageous villains, which also led to some pretty violent battles often resulting in Kamen Rider Amazon biting, chopping, and mauling his enemies. These savage attacks often led to the monsters bleeding and spewing out colorful liquids. I don’t know how this was possible because just watching the episodes, it’s fairly clear he is not a cyborg but rather gets his powers from some other means. I never bothered to research the hows or the whys, but I was confused either way.

Naturally, I needed to get the figure to complete my Showa Rider collection and Bandai really delivered in ways I didn’t really expect. I think this is by far the best representation of the character, and that comes as no surprise considering the stellar work Bandai has done so far. The helmet is nicely done and even has an articulated jaw. The costume is nicely done and even the red markings are actually sculpted in. I’m assuming this figure was pretty costly to produce.

The fin on his back is even really well done. I have to admit the figure is a bit tough to handle because of all the sharp corners in the fins and gloves, but I’m thoroughly impressed with the level of detail that went into Amazon. It’s probably why he’s fairly expensive and not easy to come by.

He’s got all the articulation that the others have so you know what you’re getting into. I still stand by my assertion that these are the best articulated toys on the market in this scale. He doesn’t sport the bicep cuts which would’ve been nice to have, but by no means is it a deal breaker. He can attain most Amazon poses and I will say it again, this figure is much better than any of the Medicom offerings in any scale.

The paint work and colors are also very mice and vibrant. Considering the complexity of the red markings, a little bleed here and there is easily forgiven. Even the wash work is nicely done. For a character I don’t really care about, I think the figure is fantastic and I can’t really find anything I don’t like about him.

The figure comes with the usual assortment of hands and a different scarf piece, an action effect piece to highlight his chopping attacks, some belt pieces, a whip like weapon, and the arm band thing which I think gives him his powers. I honestly don’t remember as it’s been 10 years since I’ve watched the series. All I know was that I couldn’t wait to finish it.

I think this figure is a little more fragile than the others. I don’t know if it’s psychological because of the cost of the figure, but the spiky edges make me nervous. Japanese toys aren’t under the scrutiny U.S. toys are, so they can get pretty sharp AND brittle. It’s best to make sure he doesn’t have to fall far when on a shelf.

Overall, I really like the figure despite not really being a fan of the character. 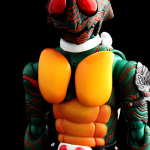 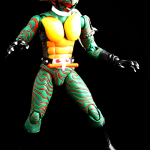