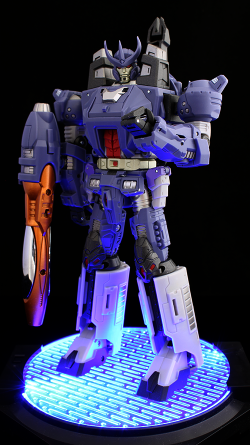 Sometimes a beloved character that undergoes changes is met with polarizing responses. It happens to musicians, movies, and even cartoon characters. When Megatron was turned into Galvatron, fans either loved it or hated it. Gone was the raspy voice so wonderfully done and replaced by a more whiny and cranky voice. Gone was the Walther P-38 and replaced by some laser cannon. Gone was the intelligence and cunning and replaced with crazy. And unlike many, I actually liked the character.

Don’t get me wrong, Megatron is always tops for me, but it brought a new dynamic to a character that had grown a little stale and unable to defeat Optimus Prime. I actually quite liked the cannon mode because he no longer required anyone to hold him, and when it came to toys, the trigger was no longer his crotch.

I never had the Galvatron toy but my neighbor did and I can remember being a bit disappointed in that the toy did not do justice a new/old character I had grown to like. In my toy universe, Galvatron was never a crazy idiot but rather a more enhanced version of Megatron and that’s the way I still see it today.

I was never really interested in any 3rd Party Transformer toys that seem to have flooded the market over the years. I tended to be a Hasbro loyalist and really loved their Transformers Classics line. For some reason, they re-did Megatron into some kind of space gun, and their Galvatron was cool but was a tank and not a very good figure. But then, while perusing some websites, I came across this Galvatron done by Unique Toys. 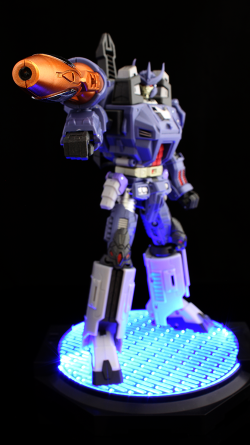 This is the second version of this figure done in what they call ‘Vintage Colors’ which I take to mean cartoon colors. The first seemed to be more in like with the vintage toy. Naturally, it’s an unlicensed product from a Chinese company which is usually hit or miss. He’s known as Mania King, but come one, we all know who he is. So how did he turn out?

The first thing I have to point out is that while the execution and engineering is simply amazing, the quality of the plastic is rather cheap. It’s of the brittle sort, and that doesn’t bode too well for figures that need to transform and move around. They don’t have to follow the same quality standards like in the U.S. and Japan, so if the corners are going to be sharp, they’re going to be sharp.

Overall, it looks pretty darn accurate to the character on screen. There are some differences here and there but there’s no mistaking it’s Galvatron. The head sculpt is quite nice and really captures his sinister personality. But even more impressively, the body sculpt is not only well represented, but transforms completely without any loose pieces or add-ons. Whoever engineered this figure ought to get some recognition. I thought some of the Classics figures had some ingenious transforming parts, but I think this figure wins by a mile.

The actual transformation is cleverly done and every piece is either well hidden or well utilized. A good example of this are his shoulder pauldrons that also act as the treads in cannon mode, or the legs that change into the main chamber of the cannon. The only part that seems to be a little odd is the head but I don’t see it as being a huge deal. If you want more details on the transforming sequence, you can find some really good YouTube videos that cover it in better detail.

The articulation is also darn good and is probably even better in many regards than the Classics figures. About the only area that is slightly lacking would be the arms as they give him more of that gorilla look, but considering what this figure does, I think it’s easily overlooked. After all, this is more of a 7″ figure rather than the large masterpiece figures.

Accessories? He doesn’t have much other than the Fusion Cannon, if that’s what it’s still called. I can’t remember if they called it something else. It’s nice and doesn’t cause the arm to drop. An even better touch is the LED in the barrel. That’s it, but he doesn’t really need anything else.

Overall, I like this figure a lot. I just wish it was made of better plastic material and felt a little more sturdy. I would be very careful about dropping him as he is not even close in being as solid as a Classics figure. But if you like Galvatron, then this figure is about as good as it gets. 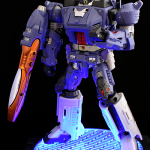 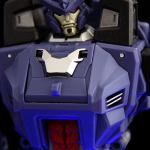 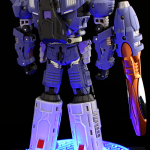 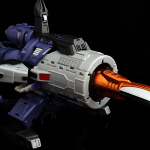 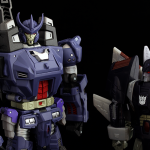 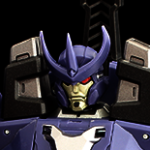