When you think about professional wrestling, common names that come to mind are Hulk Hogan, Ric Flair, Stone Cold Steve Austin, or Shawn Michaels. And yet, behind each of those great wrestlers is a great architect. The one who helps create the characters, the stories, the venues, and the opportunities. That person is Vince McMahon Jr., and the world of Sports Entertainment would not exist without him.

Over the years, my list of role models has evolved and changed over time, but Vince McMahon has always been one of them. It always amazes me when people are so passionate about something, are willing to put everything on the line for it, and simply love what they do. Ask any wrestler past or present, and they will all tell you how dedicated he is to his company and industry. It is that measure of success that has always kept him as one of my favorites and someone I truly admire. I would love to have lunch with him one day and simply talk about life. 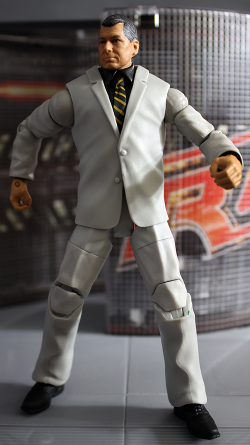 It was only a matter of time before Mattel would finally release the chairman to stand alongside the rest of the WWE Superstars. In recent years, he hasn’t been on-screen as often, but you know he’s still working as hard as ever behind the scenes. But as toys go, if you’re not on TV, it’s hard to sell. So Mattel decided to sell Vince in his suit as a mail-away offer from Toys R Us. The concept was to help rid the shelves of old product while rewarding people with a cool figure.

I admit, I didn’t mail away for the figure. I wanted to, but I simply didn’t have the time to go to the store and get figures I actually wanted within the time frame of the offer. I missed it, and eventually regretted it. I finally ordered one, and despite paying a premium price, I actually think I did OK since I didn’t have to get figures I didn’t want, and then mail away for it. In any case, I have one. Yay.

As I’ve stated in previous rundowns, Mattel is hit or miss when it comes to head sculpts. Vince falls right into the middle of the spectrum. If I stare at it, I can definitely see him, but I still think it’s a bit off. I’m not sure if it has to do with his shorter haircut, but there’s just something about it that’s not quite right. The Jakks head is much better, but unfortunately a tad too large so it doesn’t quite work. The suit is nicely colored and I think the color coordination is very fitting for Mr. McMahon.

The figure is also tall which seems to be a constant flaw in the suit figure buck. Vince is big, we all know that, but he’s not as tall as the Undertaker. This makes it really hard to have him in the company of the other figures. It’s probably best to put him front and center with the taller figures in the back to make it look reasonable.

The figure sports Elite level articulation. He can get into some really nice poses, can hold the mic well, and can even replicate his patented Power Walk. The suit is fastened with adhesive so I wouldn’t try to open the coat. It doesn’t stay closed if you do so.

If you’re looking for extras, the figure has none. I really thought a mic could’ve been included as well as a title belt or something, but you get nothing.

Overall, I think you have to have a figure of Vince McMahon to really complete the WWE roster collection. It just seems empty without him. 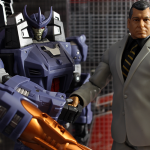