It’s time for Wrestlemania, and what better way to celebrate by taking a look at the best there is, the best there was, and the best there ever will be. He is the Excellence of Execution, one of the greatest of all time, he is the one and only Bret “Hitman” Hart. He is #1A for me, standing next to Stone Cold Steve Austin, and when it comes to being a technical wrestler, I think Bret is the greatest ever.

The only reason he’s a step behind Austin in my favorites list is because Stone Cold the character resonated more with me, but when it came to heroes, The Hitman was always tops. I always preferred Heel wrestlers so when most fans were cheering on the British Bulldogs, I much enjoyed the dastardly deeds of the Hart Foundation. I can remember to this day how they won the Tag Team belts from the Bulldogs by the nefarious means of Jimmy Hart.

Fast forward a few years and when Bret began a singles run, I was a bit sad not to see my favorite tag team. Still, I followed his career enjoyed watching his ascension to the top. I was always a Hitman fan and never really cared for Shawn Michaels. HBK is a fantastic wrestler and I’ll always respect his skills and talents, but I was always preferred Bret. I’m just really happy the two have been able to reconcile their differences. 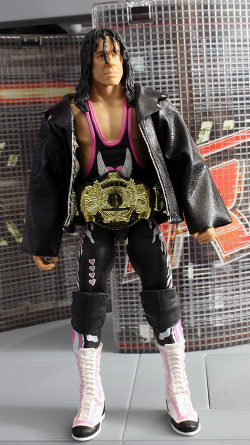 When Mattel announced they would release a figure of the Hitman, I was excited yet very apprehensive. Seems like a common theme when it comes to these WWE figures. What color combination would we get? How would it look? I was always disappointed with the Jakks offerings but was thankful to even have a figure of him considering the relationship between Hart and WWE. So I waited until it was revealed.

I was happily with what I saw. First, the color combination was my favorite rendition. I really enjoyed the Heel Hitman in the late 90’s and always thought his outfit during that time was the best version. Even better was the fact I’d never have to buy another version of the figure since it was great the first time around. Jakks took several years to get to this outfit.

In terms of representation, about the only thing I’m not thrilled with is the head sculpt. It’s close and yet it’s not. It has the facial features but it doesn’t look like Bret. I don’t know how to describe it. I may just have to swap it out with the Jakks one which looks a lot more like him. I’m also not too fond of the hair as it looks a bit soft especially with the bangs. I’ve moved it in some pictures.

As for the figure itself. I think after having these WWE figures for awhile I’ve gotten accustomed to their limitations but it doesn’t mean I’m satisfied. I still really hate the hip articulation. That gap between the thighs and the posterior is really unsightly and more so when the figure is wearing long tights like Bret. It wasn’t so bad with Austin or Hogan, but here, it’s really noticeable and just looks terrible. And despite this attempt at new engineering, it fails in the range of motion department. The legs are restricted by the hip socket and makes it impossible for the figure to squat. These are wrestling figures!

And then there’s the awful ankle articulation. At some point I will definitely write a post about my hatred for Mattel ankle articulation. If they put less focus on the ankles and more into the hips, you’d have a winner. These figures regularly topple over and take their friends with them. It doesn’t matter how tight Mattel tries to make them because it’s more of a design flaw.

Bret came with a championship belt, elbow pads, a flag and a nice jacket, but no knee pads. Luckily I had spares to complete the look but I’m surprised they weren’t included.

Overall, I like the figure more than I should mainly because it’s one of my all time favorite wrestlers. 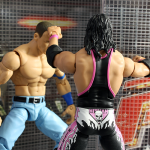 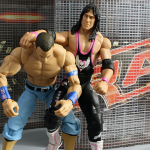 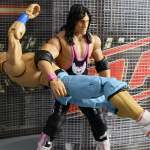 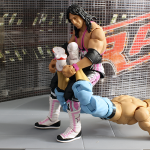 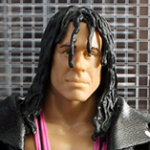