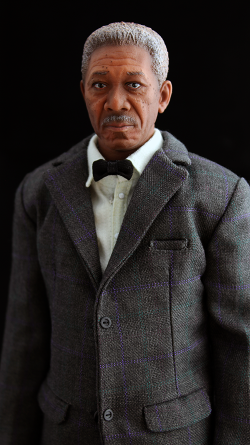 Behind every great here is a great… tech provider. At least in the case of Batman. Bruce Wayne was very selective in his allies and Lucius Fox was essentially his left-hand man with Alfred being the right. Fox provided Batman with all the tech and weaponry in his vigilante crusade to rid Gotham of crime and corruption. Although he was essential in the comics, the character was never exposed on the big screen until Christopher Nolan’s Dark Knight Trilogy.

As of this writing, Hot Toys has not produced a figure of Lucius Fox but something tells me it’s not too far off the horizon based on the upcoming releases. Many customizers have taken the task to create a great Fox figure but it was only recently that really good head sculpts started showing on eBay. Naturally, the head sculpt took some careful searching as most did their best to give it a generic name. Very recently, an actual figure was released to the public under the name ‘The CEO.’ This is of course all due to trying to avoid cease and desist letters from the movie companies.

If you have a Dark Knight collection, it just felt empty without Fox. He did, after all, appear in all three of the movies. It’s also even more crucial because I feel those were some of Morgan Freeman’s best performances. That’s what I really liked about Nolan’s take on the Dark Knight – he looked for great actors, not just great looking ones that so many of these movies seem to do. So how was this figure created?

Head:
The head sculpt comes from ‘The CEO’ figure from Ace Toyz. It’s the best head sculpt I’ve seen so far, although there’s another similar figure coming out from another company. The only thing I don’t like are that the eyes are slightly off center looking toward the left. It’s intentional as that’s what the prototype was like. But I don’t understand why people do it. It just essentially locks the figure in place. still, it’s a nice sculpt and the work on the hair is quite well done.

Body:
I’m using a Hot Toys True Type dark figure. I elected to use it for quality and conformity. The base body from Ace Toyz is quite serviceable, but I really wanted to give it something more. The skin tones don’t quite match the head, but that’s ok since he’s wearing a suit. I’ve also chosen to use the extended ankle pegs to give him a bit more height. Of course with that, he tends to balance poorly, but I’ll fix that somehow.

Outfit:
I’ve taken the suit from the Ace Toyz figure because it actually drapes quite nice. Out of the box it looks a bit cheap, but with a little adjusting, and also maybe because I’m using the Hot Toys base body, it actually falls quite nicely. The shirt comes from the Hot Toys Agent Coulson figure which I got off of eBay loose, and the bow tie was also gotten from eBay. I’m also using the padded body suit from the Ace Toyz figure to give him a more matured look.

I’m quite pleased with the final result. I’ll probably tweak the figure more with the other figure coming out or if Hot Toys releases one, but it will do for now.