And then there were three, and what a third it was! Things got really interesting when Kamen Rider V3 hit the scene, and the series holds a special place in my heart as it was the Kamen Rider series I grew up with. He was the first Kamen Rider who talked trash to the villains, and even laughed at their faces when he was discovered spying or breaking in. This Rider had no fear and let you know about it.

Those of us who grew up in Hawaii during the late 70s are quite attached to Kikaida, but for me I always liked Kamen Rider V3. The stories were a bit more interesting for me, and the villains were really entertaining. Every once in awhile Rider 1 and Rider 2 would make an appearance and it would be even more exciting. As the story goes, V3 inherited both Rider 1’s skills and Rider 2’s strength making him a formidable hero in gratitude for saving them from Destron. Over the course of the series, he learns about his powers and potential and ultimately ushered him into being arguably the second most popular Kamen Rider next to Rider 1.

So it was no surprise when I pursued the purchase of V3 just a few days after getting Ichigo and Nigo. As soon as I opened the package I knew I was in for a treat. Just the look alone was enough to make me happy. 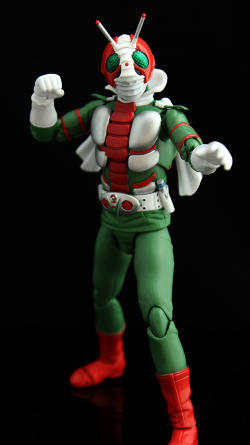 I think this is by far the best V3 rendition out there, even more so than the 1/6 scale figures. The helmet is especially beautiful and has a nice shine to it which is a stark contrast from the Double Riders. The details and the figure itself just reeks of V3 awesomeness. If I had this V3 as a kid it would probably be my favorite toy and would accompany me wherever I went. I really can’t think of anything I would change as it’s practically flawless in my opinion. The outfit is just perfect. The colors are just right and the trim is downright fantastic. Even the shoulders are done nicely allowing you to use and pose the white scarves. Even the double typhoon belt is nice with a place to attach his V3 Hopper. The only thing I don’t quite understand are the articulated chest pieces, but at this point, who cares? It’s just a beautiful figure and I really can’t think of anything I’d change.

As I’ve now grown accustomed to, the paint work is fabulous with no slop at all. The gloss on the helmet is great and the colors are pretty spot on to the actual costume. Can’t ask for anything more. Some will say the green is off, but to me it’s pretty spot on.

As far as articulation goes, it’s no different than the Double Riders. He doesn’t have bicep cuts which I think he really deserves because they could’ve hid the cut at the red arm bands. Still, the articulation is more than adequate to get him into most action poses. The bottom of the shirt just hinders the legs ever so slightly, but very little, so it’s a moot point in my book.

V3 comes with the standard assortment of hands, a Rider Kick effect attachment, different scarves, and the V3 Hopper in three versions – the Hopper itself, an empty holster, and a Hopper in the holster which you can attach to his belt. It’s very small so it may be very easy to lose the Hopper and then V3 won’t be complete and you’ll be upset. Be careful.

He’s about as durable as the other figures but he has a few more moving parts. For one, it’s really easy to lose the Hopper as mentioned above. Secondly, his scarves are independent which means the possibility of breaking not just one but two and that would be bad. The third of course are the antenna on his head. Unlike the Double Riders where their antenna are swept back, V3’s jut out forward and they are also straight. If he hits the floor, chances are these would break. It would’ve been nice to have replacements or have the antenna made of a gummy material. That problem alone makes him very difficult to place him in storage.

He’s just about perfect. He’s probably my favorite figure of the bunch even though my favorite Rider will always be Nigo. Interestingly enough he’s still readily available on both Amazon on eBay at reasonable prices.

Notes: V3 is sitting on a Hurricane made by Banpresto and was not meant for Figuarts, but it works very well. The Figuarts Hurricane will come out in March 2015. 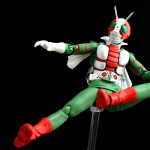