Every once in awhile an action figure gets produced that you never thought would happen. It’s not because it’s a bad idea but rather because nobody really thought about doing one from a commercial success perspective. The Figuarts line has been mostly geared towards popular and heroic characters like Kamen Rider, Sailor Moon and Ultraman, so it was quite an interesting piece of news to see that they would be releasing Sadako from The Ring.

I have two confessions. The first is simply the news release of Sadako was what solidified my interest and curiosity in the Figuarts toys even before I bought the Kamen Riders. The second is I have never watched the movies. I actually don’t like or watch any horror films probably because I was so traumatized as a kid. To this day I still get the chills and my creative head only intensifies those fears. Ironically, I used Sadako in a number of my lessons while teaching English in Japan and the students seemed to find it, well, humorous I suppose. So during my most recent trip to Japan, I picked the figure up and actually chuckled quite a bit in the hotel room at the unusual action figure. 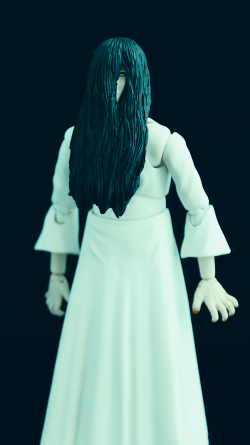 There’s really nothing special to her appearance other than wearing a plain white dress and a head full of black hair covering her face. And yet, it’s still pretty scary. Living in Hawaii you hear these ghost stories about some fairly creepy supernatural beings and this look goes right up that alley. The figure is spot on and even her hands are bloodied from trying to climb out of the well. It’s just a really well done scary figure and if you use the alternate hair piece which unveils an eye, it is even more creepy. What’s also nice is a different skirt piece for her crawling pose is included. You just split her body from the torso, open the shell of the dress and put the legs in there to mimic the crawling pose. It’s so disturbing I’m just waiting for the figure to start moving in jerky motions.

For the paint, there really isn’t much, but the work that is there is well done. The bloody fingers are nice, and the ever so subtle wash on the outfit is pretty damn good. Actually, I don’t know what more they could do considering the source material.

From an articulation standpoint she’s loaded. Sadako has the usual range of motion that most Figuarts have and maybe even more so. She has articulated knees but she can’t really make use of them in the standing position since her dress is not cloth or articulated. Still, you can achieve most poses related to this character and it can sometimes look downright disturbing.

She comes with a whopping number of accessories so her price point isn’t too surprising. You get the customary assortment of bloody hands, the lower bent dress shell, a videotape, several different hair pieces, an alternate head that is just hair and used for certain poses, and a television with two different inserts, one of the regular screen and another with a connector for her torso to allow her to crawl out of the TV.

Sadako is a bit flimsy due to the number of articulation points they’ve given her. She’s in a slightly awkward posture which is quite accurate for her character but it presents a little center of gravity problem. She’s slightly leaning forward and her hair is in front so she tends to want to topple over. Her lower half is also a bit on the loose side so she just can’t hold too many dynamic poses without wanting to move around. Her dress is also a matte white which means anything of color that touches it could potentially leave some marks. If she falls off the shelf into some dangerous territory, it could get scratched and marked up quite a bit.

She’s about as perfect as you can get for a character I don’t think too many companies would have even attempted. I think it was a daring choice and executed quite well. I’m curious to see what the next obscure choice will be.