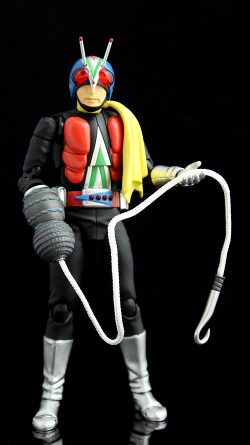 The first Kamen Rider sidekick was Riderman who joined Kamen Rider V3 in fighting Destron. It seemed like an odd thing to do considering how popular and how strong V3 was so for most of us as kids, Riderman simply got in the way. Yet, he’s considered one of the legendary Riders. Not sure why, but ok.

There was really nothing special about him. He was a scientist of Destron who got tortured and lost his arm. He replaced it with a robot arm and suddenly he had the ability to change into Riderman. He didn’t have any real powers since he was never really a cyborg so he was often limited in what he could do. In fact, his motorcycle didn’t even change. Still, he helped V3 defeat Destron and also seemingly died at the end, only to appear in other series. I never researched how he survived, but he did. 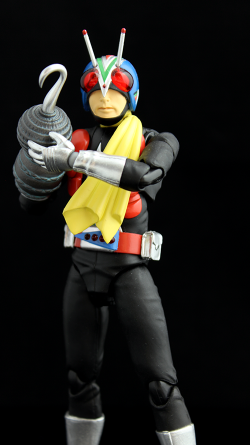 Figuarts took a stab at him, and he actually came out quite nice. He’s usually the Rider I tend to skip in all goods, but he seemed to be needed in my new collection. Not surprisingly, he’s pretty easy to get at a cheap price.

This is the first Figuarts Rider I’m not blown away by. I think it’s because of the fact his lower face is exposed and there’s something just a little off with the helmet. Still, it’s probably one of the best Riderman representations I’ve seen, but compared to the first three Riders, it’s not quite there. It also doesn’t help that his outfit is plain, but overall it’s a decent looking Riderman. As for the outfit, it’s done quite well and is a great representation but nothing makes it stand out quite like V3 did. The part I really don’t care for is the scarf and how it sits. The ball joint is actually toward the back of the neck so it’s a little strange.

Similar to Rider 1, he sports a nice silver and I’m still impressed by that paint choice as it’s one of the nicest silvers I have ever seen on toys. The rest of the colors are pretty accurate with no slop at all and I’m continually impressed by the paint applications done on this line. Good stuff even though it’s a character I never cared for.

Riderman is the first of the Showa Riders to sport a bicep cut. It really helps the figure achieve some really nice poses and I just wish the others had it too. He also comes with articulated chest pieces and I’m not sure why it’s even there. I suppose it helps with allowing him to move his arms across his body, but it really doesn’t make a lot of difference. He also sports a detachable forearm allowing you to attach the Riderman arm.

Now when it comes to extras, this is a loaded figure and mostly because the character demands it. He comes with the Riderman insect arm thing and it comes with an assortment of attachments like the hook, sickle, and spiked ball. You can even attach 2 different ropes to the end to make his famous “rope arm” weapon. He also comes with his drill arm and a curved blade arm attachment in addition to the usual assortment of hands and alternative scarf. Whew!

Usually with additional articulation comes additional structural breaks. Thankfully, Riderman doesn’t suffer from them. But he does feel a little more fragile than the others. The part that really concerns me are the antenna on the head just like the other Riders. Like V3, they are placed forward on the helmet and they will definitely break if he falls being as fragile as they are. I still wish Bandai would have included replacements because they are really thin and brittle, or use a softer material. The scarf also doesn’t sit too well and the arm attachment doesn’t attach quite as securely as I would hope. His costume is also a matte finish so any scratches will definitely show.

Overall, Riderman is a nice addition to the lineup and worth the price. 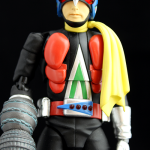 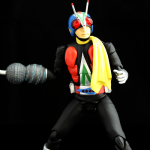 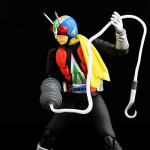