I saw a few movies at the theater when I was living in Japan. I say few because I used to go to the movies a lot. I say few because it’s quite expensive to see movies in Japan, and the experience is a bit different than what we have in the U.S. Usually a sports buzzer goes off when the movie is about to start, they also have movie memorabilia you can only get at the theater, and in some cases, you have assigned seats, all for the nice price of almost $20 just for the ticket. One of the movies I saw was supposed to be the last Godzilla movie made by Toei.

I’m not the biggest Godzilla fan as his heyday was before I was born. I knew of him and watched a few movies, but I never really knew the mythology behind it. I knew the names of some of the more popular monsters, but I never knew their origins and never really looked into them either. So when I saw the last Godzilla movie, I didn’t quite share the nostalgia other people felt. Still, when I saw that Bandai made some super articulated Godzilla figures, I decided it would be great to have one.

So during my trip to Tokyo, I decided to buy him as he was going for a really good price compared to getting him online, which is really an obvious understatement.

Godzilla is as synonymous with Japan as Mount Fuji and shiba inu’s. I don’t think I need to explain him since he’s older than Michael Jordan. He’s a big monster whose appearance has changed over each decade, and in the 2000’s, he looked meaner, more refined, and his spine was much more artistic. Since it was the last Godzilla I saw, it felt fitting that this be the Godzilla figure I’d want.

The figure definitely looks like how I remember, even down to the spiky spine. One thing that these high end Bandai figures do is capture the source material very well. It’s rare because Japanese toys tend to be more ‘toyish’ but I’m really impressed with the work they’ve done lately and I just hope they keep it up. He looks mean, muscular and really intimidating which is a huge contrast compared to the versions of the 60’s and the 70’s.

Overall the work is very nice. The body has a really nice wash and the spine is nicely painted. Even the teeth have that decayed dinosaur-look that makes you feel like you’d contract a prehistoric virus if bitten. The area that’s not so good are the eyes. I think they’re accurate, but just a tad sloppy which I’m not quite accustomed to in these lines. It’s not like it’s terrible, but it looks more like something from MOTU Classics than it is a high end line like MonsterArts.

Godzilla is sporting a huge amount of articulation points. Most Godzilla toys have just a few, but this guy is articulated in every place you’d expect. It’s so good I don’t have anything else to really say. You can achieve most poses you would think you’d need to make for this monster.

He doesn’t come with much, but he does come with some significant items. He has an assortment of hands along with his mouth blast effect and a stand. it would’ve been great if he came with more like crushed buildings and such, but you have to purchase those separately. Still, it would’ve been cool to include some crushed cars or running people.

This figure is pretty heavy and could injure someone if dropped. He’s rock solid and very stable. The spine is a different story as while they’re very pointy and nice to look at, it also feels very fragile much like the Kamen Rider antennas. It’s best to make sure nothing is over him because if something falls, not only will Godzilla probably lose some spikes but the offending figure will probably be damaged as well.

I love this figure and I don’t think I’ll ever need another Godzilla figure in the recent future. 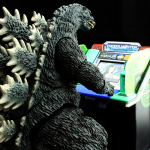 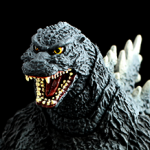