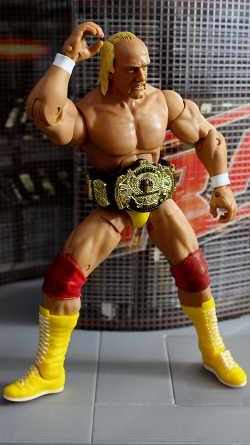 You know something, brother? Back in the 80’s, there was no wrestler more popular than the immortal Hulk Hogan. Love him or hate him, he was the most iconic superstar of professional wrestling that everyone, and I mean everyone, knew who he was. His name alone is as powerful as that of Michael Jordan and Michael Jackson. Finally, Mattel has released an Elite figure of the man. So what’cha gonna do when this figure comes after you?!

I was never a big Hulk Hogan fan and often times rooted against him when he was a good guy. Ironically, I preferred him when he was Hollywood Hogan because he was really funny and entertaining. I liked the bad guys a lot more because they were more entertaining for me. I preferred guys like Macho Man Randy Savage and Rick Rude and then later Stone Cold Steve Austin. But I cannot deny the power and influence Hulk Hogan had on pro wrestling and if it weren’t for him, the entertainment form might no longer exist.

Mattel has had the WWE license for quite some time now, but it’s taken a few years to get to Hogan since he was with another company for awhile. I think most collectors were clamoring for one and finally fans can enjoy having one. I figured it would only be appropriate to begin my wrestling figure reviews with him. 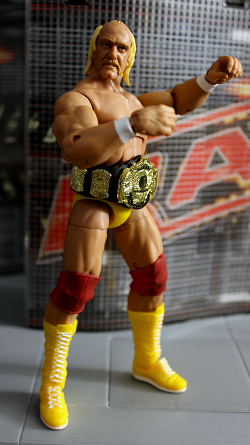 When it comes to head sculpts for Mattel’s WWE figures they are really hit or miss. Sometimes they’re quite good for the scale and other times I just don’t understand. When it comes to Hogan, he’s smack in the middle. I know it’s him, but something about it is just off and I don’t know what it is. The features are there, but it just doesn’t seem like it translated well. It could be the hair and the weird holes in the head which allows you to attach his bandana rag. Other than that, the body used is a great choice and Hogan’s color scheme of red and yellow is done reasonably well, although I wish they had chosen a better plastic formula for his yellow boots.

As for paint, there’s hardly any used on Hogan as his outfit was pretty plain. They did add a second tone to his red knee pads which is nice but wasn’t really needed, at least to me. The work done on his face is quite good, although the hair just seems so flat. I think a slight wash would’ve done wonders. I probably would’ve preferred that they added a clear gloss coat on the boots as Hogan often wore really shiny boots.

Overall, the figure sports a great range of articulation, but it suffers from a few issues that is common across the entire Elite line. The ball joint at the neck is a little funky and doesn’t hold some poses quite right. It often tilts the head a bit for some strange reason and it puzzles me even more as their MOTU Classics like uses essentially the same stuff with no problems at all. The second thing I don’t quite understand are the pin elbows even though the knees have double joints. Considering these are ‘wrestling’ figures they ought to sport a wider range of motion in the arms and even the shoulders. The rest is good albeit standard to most figures in this scale. In any case, you can pull off most action poses.

Wrestling figures don’t really need much, but it’s always nice when you get extra stuff. Hulk comes with his signature bandana rag (not pictured), along with a ripped tank top (not pictured), and also a championship belt during the WrestleMania 2-3 era (not pictured). I felt it was more iconic to have him with the more popular ‘winged eagle’ belt.

These figures are quite sturdy even though they have a fairly high number of articulation points. About the only place of concern that I have is the hip articulation. That would probably be the weakest joint, but otherwise I don’t see any problems for these figures over the long term. The plastic used is also very good so I’m not too concerned about age.

When Mattel obtained the license I was a little irritated with the idea I would have to buy everything all over again after having spent time on Jakks figures, however these figures are quite well done and I have since liquidated most of my Jakks WWE figures. As long as the figure quality doesn’t go down, I’ll be more than happy to get my favorite wrestlers. 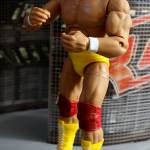 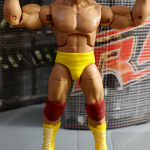 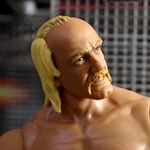