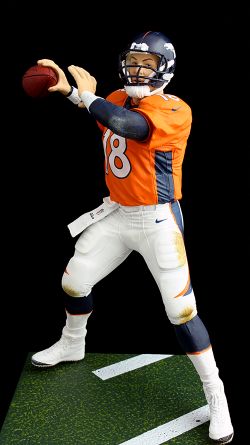 When it comes to sports, my favorite players are usually the ones that have great class, understanding, and respect for players and the sport they play. For me, those qualities transcend the usual barometers of championships, wins, and statistical superiority. For those reasons, Peyton Manning is my favorite player and I consider him the greatest Quarterback to every play the game.

He might not have the number of championships the other great Quarterbacks have, but I have never consider Super Bowl victories as a measure of success. Football is the greatest team sport and requires every single person on the team to do their part. To put it solely on a single player is simply ignorant and lazy. Sure, the position is probably the most critical for success, but it’s a team sport. You would be hard-pressed to find someone that plays the position with the consistency and cerebral mastery that Peyton has.

McFarlane has been slowly releasing their line of NFL players in their Sports Picks line. Originally, I thought it was a great chance for them to expand their brand, but now I’m just anxiously awaiting for someone to take it away from them. I was not, and never have been, a fan of McFarlane figures. They were somewhat innovative back in the day, but the plastic quality was always shoddy at best. Then they got really detailed and had some nice figures, especially their horror stuff. And then Father Time was not too kind. Their way of making toys is so outdated I’m surprised they can still keep going. 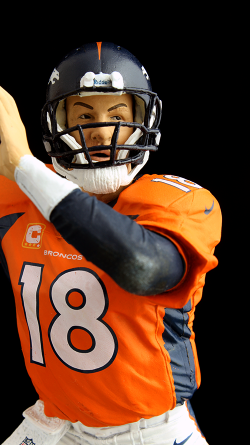 As far as colors go, it’s quite good. I actually have an authentic NFL Bronco’s jersey so I’m pleased the colors were close to spot on, and the logos are all their. But that’s about the only thing that impresses me. As far as being a likeness of Peyton Manning, they fall really short. It doesn’t really look like him. At all. I don’t know the order of how they sculpted, but if they started with the face first I would hope someone would’ve questioned the likeness. Add to that the figure is just not a correctly proportioned representation of #18. Manning is tall, slightly thin for an NFL player, and his torso is especially long. He wears a flack jacket to protect his body that sort of gives him a pot-belly look and he’s not as bulky as this figure implies. I am by no means a McFarlane collector, but I have a suspicion that they recycle the same bodies. If that is true, then all the more pathetic. Even the hands seem a bit lazy, so all things considered I’m not exactly thrilled with the end result.

Like I mentioned, the colors are spot on. They are nice and vibrant and the work on the helmet is quite nice. They even added a few stains on the pants, which would indicate he’s been hit or sacked which I find ironic. If there is one thing I don’t care for it would be the white numbers. They seem a bit too translucent which allows the orange to come through.

How about articulation? Huh? You’ll never get much from these McFarlane figure statues. You know that going in, but it doesn’t mean you have to like it. I really don’t understand because NFL football players demand a wide range of motion so I always found it silly that these figures can’t do anything. I still don’t understand why this company insist that collectors don’t care about articulation. NECA used to be the same way but now they’re doing some amazing articulation in their figures. It’s 2015 folks, not 1995. This figure has exactly 3 points of articulation, and none of them are useful. Sad.

You get no extras. I don’t count the base as an extra because you need the base to stand the figure up making it an essential and not an extra. So this alone means there really isn’t a good value for this figure.

How about longevity? On one hand, being such a solid piece of plastic should allow this figure to withstand a lot. It’s the materials that concern me as McFarlane tended to use a lot of brittle plastic. I worry about the metal post in his foot that is used to slot him into the base. I also don’t like the gummy and warped plastic used for the facemask. I also get the feeling if this figure falls, you’ll get some really bad scratches. From afar it looks great, but in hand, I just don’t feel like I’ve got something that will last.

I like the figure for what it is, and it would make a nice display piece on a desk or TV stand. As an action figure? There’s really not much to it. I had to get it simply because I’m a huge Peyton Manning fan, but I’m not impressed at all. I’m hoping someone else will take the license and do something amazing with it because what’s being offered now is weak, lazy and lacking in any spirit. 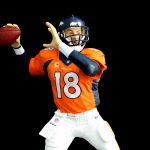 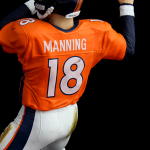 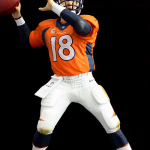