Re-telling of origin stories can be a very tricky thing, especially in movies. Most people that grew up with Richard Donner’s Superman have a very special place in their heart for Christopher Reeve’s portrayal of one of the most iconic superheroes of the modern era. Hot Toys did produce a Reeve Superman and it’s one of those figures that is the epitome of solid craftsmanship of a beloved portrayal. So how did the Man of Steel version compare?

I really, really want to love this figure. My first figure had a flaw when I attempted to test out the knee articulation. When I bent the knee, the seem tore, most likely because the outfit was snug against something. Thankfully, Sideshow was willing to replace it so all was good there. That aside, the figure is close to being great, but a few things just don’t feel right to me.

The portrait is definitely Henry Cavil and it’s amazing how lifelike it is. The problem is the head is a bit large. By himself it’s not that noticeable, but when standing next to other 1/6 Hot Toys figures, it stands out. He’s also too tall and I’m not sure why that was allowed to pass. He’s taller than Iron Man! He’s more like a 13″ figure. I guess you could explain it that he’s an alien from Krypton, but it just makes him stand out too much. On his own though, he’s definitely the Man of Steel version of Superman with some nice work on the costume.

I’m not sure how they did it, but they were able to re-create his costume down to the material pattern. It really boggles my mind and I won’t even try to figure it out, but the problem I have with it is the problem I encountered with the first one. If you futz with it too much, you run the risk of the fabric tearing or breaking at the seem. It’s especially thin, and because we’re dealing with 1/6 scale, the tailoring has to be really close with very little margin of error. Otherwise, it looks like a dress up doll. So on one hand, the craftsmanship is superb, on the other, the execution is tricky and fragile. The chest symbol is very nicely done though, instead of the iron-on done on the Reeve figure. Even the boots are quite nice with a nice feel to them, but it just feels really fragile. I also don’t like pillow case-style capes, and he would’ve definitely been better served with a hemmed single sheet.

Hot Toys continues to impress with their paint work and Superman is no different. There is nothing more to say. Even the work on the emblem is nice and looks lived in.

For the most part, he sports the usual Hot Toys articulation we’ve all come to love. The limitation is the costume, and I’m a bit weary to really test the limit. He should do ok in most poses, but do make sure you don’t have any snags or areas that might pinch or stretch the material. The stitching is so close to the edge it would be really difficult to re-stitch the outfit.

He really doesn’t come with much since he’s Superman. You get the usual assortment of hands, the Kryptonian access key, and a stand. Even though he doesn’t need much, they could’ve included a few more extras. I think they could’ve made his eyes light up similar to their execution on Wesker.

To be fair, I didn’t really test the limits of the figure, and that’s because I don’t want to. Knowing what I know about the tailoring of the costume, I’m very careful in what poses I put him in. If it breaks at the seam, you’re doomed, and the way the costume is affixed to his body, you can’t really replace it either. I wish he felt sturdier to me because I’d really like to use him more often for things. Here’s hoping the next version is more durable. Definitely keep him away from sharp edges. 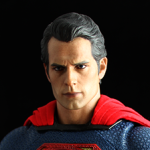