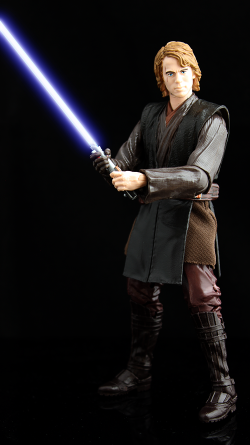 I will admit I was not initially on-board when Hasbro announced their plans to release 6″ Star Wars action figures. Yes, the market demanded it, but I had spent a lot of time and effort invested in the smaller scale that I really did not want to start all over again. When samples were revealed at shows, I still hesitated. When websites reviewed them, I still hesitated. Even when I saw a few of them at the store, I abstained.

But curiosity took over and I bought Darth Maul and I can happily say these figures are really nice to have. What’s even better is that the releases are far apart with 3 or 4 figures per assortment, so I don’t feel compelled to get every single one of them and can rather concentrate on the characters I really want.

Anakin Skywalker. He’s a very polarizing character with some people despising him and others finding him intriguing. I’m of the latter and I really like the character even though the portrayal was a bit wooden. I still think Shane West would’ve made an excellent Anakin. But that’s neither here or there, and amazingly next year will be the 10th, yes 10th anniversary of the movie. How time flies. 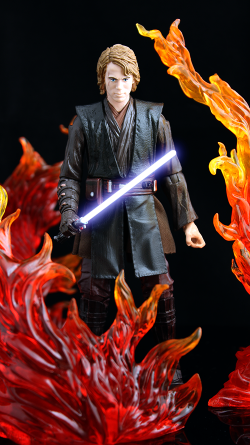 So from a character representation perspective, the figure looks pretty darn close to Anakin from Episode 3. As a portrait, oh boy. I am of the belief, as are many other sites it seems, that Hasbro once again changed factories so the paint jobs need time to develop much like they did when their Indiana Jones line came out. The problem is, that would be fine if we were like 30 figures into the line, but this line is still coming out of the gates.

As a sculpt, it’s well done in this scale. With the paint? It fails. It just looks bad even when you try to find a good one which seems to be prevalent with these figures. I just find it amusing that the 3-3/4″ figures look closer to the actor than a larger version. The outfit is great though even if the head is not. The execution done on the leather tabards and the color of the outfit is pretty spot on. These are the kinds of things I can’t figure out with Hasbro. The colors of the tunic and the pants are just right on this figure, and yet for years in the 3-3/4″ line, the colors have just been wrong. So for that I give high marks. Even the folds and sculpting are great and I especially like the way the executed the tabards below the waist. About the only thing that would be nicer is that his right hand gauntlet is brown when it should be closer to black.

As mentioned, the work on the head is pretty average which shouldn’t happen to this property. It looks like something that you’d find at a Disney Park. The paint work on the outfit is much better with good color choices and a nice wash on the boots. Compared to Boba Fett though, this figure is a step back. Hasbro needs to send some people to the factories and get them to try harder.

Most of the Black Series figures have great articulation which are executed quite well. Anakin has a great range of motion limited mostly by the constraints of the tabard. Anakin also can’t really do too many poses in which he’s holding the lightsaber with two hands. The other area I’m not quite so sure about are the knees. They work, but they just look strange. I think they could’ve made the pants go over the knees to hide the articulation much like they did with the first Episode 3 Count Dooku. To me that was an engineering masterpiece which they never really replicated since on any figure.

Anakin comes with his lightsaber that has a removable blade allowing you to plug it into his belt. He also comes with his Dark Side head which is nice, but the paint is just as bad. And that’s it. If they provided a Jedi cloak and a Jedi communicator, this would easily be a 20 because he really doesn’t need anything else. Missed opportunity here.

Hasbro has always used really good plastic. I don’t know what their recipe is, but I never feel like any of these figures will break easily. If you were to drop a number of figures from about 3 feet, Star Wars figures, and for that matter most Hasbro figures, would survive just fine without a scratch. They just feel great in hand and I never really have to worry. My Boba Fett dropped from almost 6 feet and came away unscathed. The only thing I worry about is the little peg on the lightsaber blade. Be careful.

A number of missed opportunities and poor paint prevent this figure from being great. 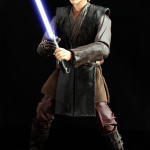 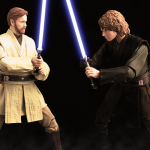 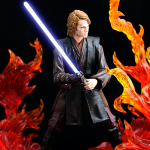