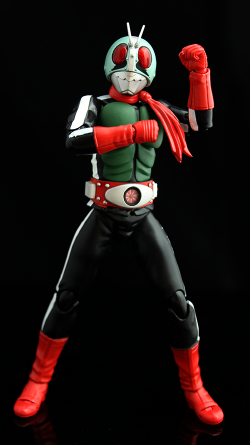 Kamen Rider 2, also known as Nigo, has always been my favorite Rider. I grew up with V3 and he was always the cool cat, or bug, but Nigo was the one I liked best. So it’s really no surprise to me that he was actually the first figure I picked up in the S.H. Figuarts line. But it wasn’t easy.

I don’t know what it is, but Kamen Rider 2 (New) is always tough to come by and I’m not sure if he’s getting the shaft or he’s being honored. The original outfit with green gloves and boots are pretty readily available, but the red motif is always rare. The figure is also pretty much given an afterthought which is odd considering his significance.

Like Rider 1 before him, Rider 2 also gets powered up by, if my memory serves me correctly, going to South America and essentially poisoning himself with every known toxin in the rain forest to become stronger, and that’s why he has red gloves and boots. Makes sense. 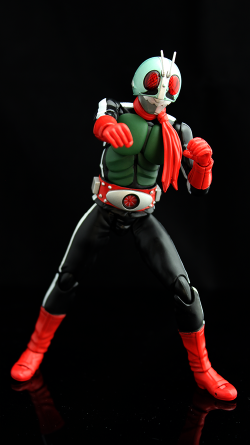 On screen, he was kidnapped by Shocker and transformed into a cyborg. Shocker didn’t seem to learn from their past mistakes, and attempted to brainwash him AFTER the transformation, and that can never have positive results. Off camera, the real reason he exists is because the actor for Rider 1 got seriously injured doing his own stunts and the producers had to decide very quickly if they should halt production which would probably doom the whole thing, or get a new actor for a new Kamen Rider. Thankfully they chose the latter and the franchise never looked back. If it weren’t for the success of Rider 2, Kamen Rider would probably not exist. As such, production continued until the actor for Rider 1 recovered and he rejoined the franchise, and thus the Double Riders were born.

And so, it boggles my mind that Rider 2 (New) is always getting the shaft. For the Medicom RAH 220 line, he was hard to get. For their RAH 220 DX line, he was an online exclusive. For their RAH DX 1/6 line, he was an exclusive, and for Bandai’s Figuarts line he was also a bit of an online exclusive. Since I got into the line so late, I had to pay a pretty penny for him. The good news though is that he’s going to be available again. But what’s even more interesting is how a lot of sites and reviews say you can pass on the figure if you already have Rider 1. Yes, it’s basically the same figure, but they’re still completely different characters, and the guy saved the franchise!

As a figure though, they did him justice. It’s definitely the new version of Rider 2. The helmet and outfit are essentially the same but he sports nicely colored red gloves and boots. It’s a very nice, rich red and I’m impressed with it much like how I liked the silver used on Rider 1. It’s the same base body so no complaints there. The only thing that bothers me a little is that the single pinstripe on the costume is a tad too wide. Still, it’s nice and not a deal breaker at all. It also depends on which source material you use since he’s had outfits with both a wide or thin pinstripe.

The outfit is painted quite nicely with a nice rich and vibrant red on the gloves and boots. It’s just as impressive to me as the silver used on Rider 1. There is no slop at all and it’s so clean I’m almost convinced they come out of the factory like that. I just hope they maintain this standard for a long time and not get lazy.

The articulation is great and I’m happy with most of it considering it’s the same as Rider 1. I’m still impressed with what they can do for such a small scale. Again, cut biceps would’ve been great especially for his henshin pose, but it’s not bad at all and not enough for me to be disappointed.

Rider 2 comes with an assortment of hands, a different scarf piece, and a Rider kick effect. He really doesn’t need much more since Rider 2 is more about power and strength and essentially kicking ass while Rider 1 was more about skill. Still, something extra would have been nice considering he usually costs more.

How will he do in the long run? He suffers the same issues as Rider 1 with the antenna on his head. I always worry they’ll break and I’ll be sad. The ball socket joint also can either be loose or tight so your mileage will vary. Treat him with care even if he can pull off some amazing poses. Replacement parts would have done wonders to ease my tension, or better yet, make the antenna out of some gummy plastic material.

Overall: A (93)
Doesn’t get much better than this and now I have the Double Riders on my shelf.

Notes: I have the figure sitting on the Cyclone from Kamen Rider: The First as they’ve never created Rider 2’s cyclone from the movie and at the time of this write up, the “New” Cyclone from the original series hadn’t been released yet.