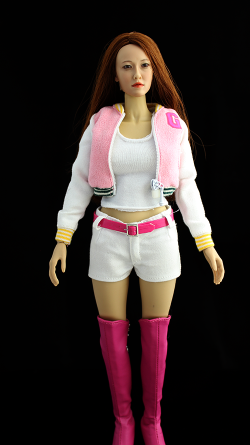 The third Girls’ Generation figure is of Sooyoung, the tallest member of the group. Surprisingly, she was one of the earlier figures I made but nearly didn’t happen because it was so easy to overlook this head sculpt. Sometimes it pays to stay up really late at night and carefully look at what’s available.

As I procured the first 3 heads, I started trying to see if more existed and I just didn’t know about it. When your search terms in eBay are “1/6 female head” the number of results are staggering. And then one night I came across a head that looked familiar but I wasn’t sure. I did some further research and came to the conclusion that it was intended to be Sooyoung. I had to look at it for awhile, but eventually I could see her and promptly ordered it. 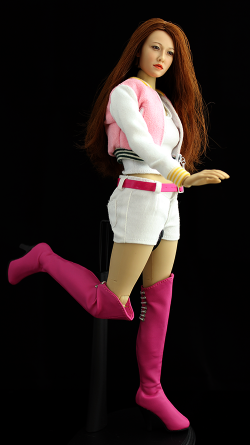 Yes, she is the tallest member of the group and immediately stands out as she towers over the other members, but her charms are a bit more subdued. Once I got to understand them, it was evident just how important she is to the group. In my opinion, she’s the spiritual core of the group and helps to keep things together. She can be really funny with her impressions, but she also has a humbleness and deep mindset that helps to keep the group grounded.

Head:
Like the others, I’m using a Kumik head, but unlike those, this one is a little hard to tell. You have to really look at it carefully before her image materializes. I think Kumik got the right idea, but it just doesn’t click like the others. Still, it’s a nice head and once you know it’s her it does the job.

Body:
I’m using the same Play Toy body for Sooyoung. Unfortunately, it doesn’t work so well because she’s so tall! There are tricks I could use to adjust height, but I don’t like surgically fixing my figures when it comes to kit-bashing. I prefer a more conventional approach when it comes to my kit-bash modifications where this figure could be something you’d find at a store and everything under the hood is just as clean, solid and fully functional. As such, I won’t adjust the height so she’ll be the same as the others and that’s ok with me.

Outfit:
It’s the same Super Duck outfit. I worry the day I want to change all 9 of them. 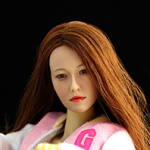