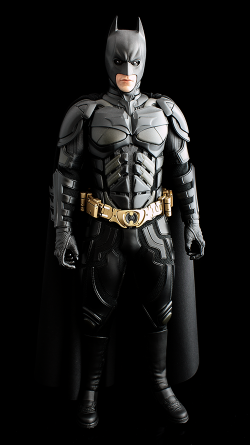 I’m a huge fan of Batman. I am by no means an expert, but the character resonated with me even when I was 3 years old and watching the Superfriends. I fondly remember saving his pages for last in my coloring books. I even remember watching the campy TV program at my grandparents’ house. He was THE character I grew up with, even if I didn’t know about his dark origins. He was just so cool. It was the Hot Toys Batman figures that really got me involved in the 1/6 scale figures. I think it’s fairly obvious I hold this figure as one of my prized figures.

Hot Toys has done several versions of the character, and I will go on record as saying the Christopher Nolan versions are my favorite. I think his vision of the franchise was a hit with me on all cylinders. You always have those that cherish Adam West or stand by Michael Keaton, those that liked Val Kilmer and even dare I say George Clooney. But, in my opinion, Christian Bale was the best. I don’t feel like I need to justify my stance as everyone has their preferences, but when it comes to a believable representation, nobody did it better than Bale and Nolan.

As far as costumes go, the Dark Knight and Dark Knight Rises version is my absolute favorite. The main points being it looked good and it was quite functional. He was not restricted by the rubber suits and could definitely turn his neck. It’s precisely what I would imagine a crazy vigilante would wear in Gotham. And then you give him a nice tank and bike and you’re set.

So how did the figure come out? Well, this would be the third version from Hot Toys in this representation. The first was a silicone type of suit that was actually quite well done for its time. Just a few years ago it was considered an Engineering masterpiece at least in my book. There was nothing done quite like it up until then. A few years later, and Hot Toys released the Dark Knight Rises version which simply blew me away. As a figure, I had few complaints because it was a toy after all, but others were a bit more critical about it. I suppose they heard some of criticism and decided to release this third version which happens to be my favorite now and even comes with the armory. 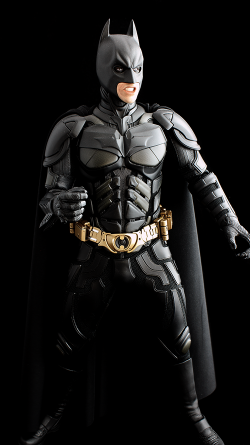 The head sculpt is simply amazing to me now. Hot Toys narrowed the eyes so they look a lot more like the character. The interchangeable mouth pieces are also nicely done this go around, especially the neutral one. If you have the previous version, you now have quite a number of face plates to choose from. The outfit is also well detailed and replicated. They’ve chosen to use some shinier pieces for the armor plates which look much better than the matte ones used on the TDKR version.

The belt has also been enhanced, though I’m not sure if it’s a good thing or not. The belt is quite fragile and susceptible to breaking. Unlike previous version where it clamped at the rear, these now attach at the sides. I’m not sure why they did this other than to allow the belts to be displayed in the armory, but I strongly advise once you put it on, don’t take it off. A nice touch where the attachment plates that allow you to customize the look of the belt so you can use single or double capsules, small or large containers, and even a holder for his batarangs.

The rest of the figure is pretty much the same, restricted articulation included. In the second version, I had actually made some modifications to the inside suite that allowed the figure to have better lower body articulation. I had planned to do the same for this one, but it’s a bit harder to get inside now. I actually thought it looked fine and the range isn’t too bad, so I left it as is without ruining something good.

The only area I feel the figure is really lacking would be the cape. The cape for this version is more of a suede or chamois kind of material. It’s actually not bad, but I don’t like the wires or the length. A lot of collectors seem to prefer the longer length, but I got for practicality and the shorter “hero” version of the cape is more my style. As such, I am using a cape done by a customizer named Tony Meis. His cape doesn’t quite have the velvet like material, but I’m ok with that. I’ve made several velvet capes for my figures, but the velvet just gives a bit more sheen than I would like. I found some better material, but it unfortunately frays easily. In the end, Tony’s cape is the best for me.

Oh, almost forgot the additional items like the armory, Bruce Wayne and Alfred. I’ll review Alfred at a later time, but the armory is well done. I actually prefer the glass case, but this one is good too. I won’t get into the small details as there are a ton of reviews online, but I will say the fact the items are usable simply makes this the best armory out there.

The Bruce Wayne figure is also well done with a very nice suit but he is not pictured here. The one seen is my custom Bruce Wayne and I have a sentimental attachment to it since I devoted a lot of parts to it.

Overall, I don’t really have anything negative to say at all. It’s one of my treasures and probably ranks as my favorite Hot Toys figure to date. 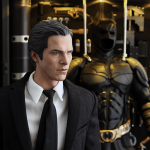 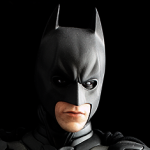