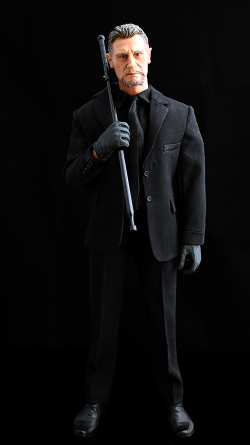 Sometimes it’s better to be late to the dance. Most Batman and 1/6 scale fans had already created their own custom Ra’s Al Ghul. Some where fantastic while others made me scratch my head. It’s blatantly clear that it starts with a good head sculpt and if that’s not up to snuff, it’s almost futile to try. But if you wait long enough, you may just find what you were looking for.

Liam Neeson has a very distinct face so anything that’s not quite right stands out like a sore thumb. Unfortunately for most, the really great head sculpts were one of a kind, and the mass produced ones just didn’t look good enough. Finally sometime in 2013 a few good sculpts started showing up, and by 2014 a handful of independent companies took a stab at making their version of the “Master Ninja” or some similar name. 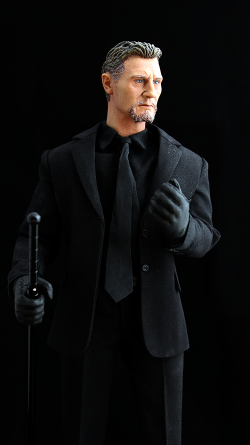 It’s still a surprise to me that Hot Toys hasn’t produced one, though I have a feeling they might eventually. But I can’t blame them considering it’s Liam Neeson in a suit (color of your choice). Pretty bland and uneventful from an action figure standpoint. But, like many collectors, I had to have one to complement the rest of the movie villains.

Head:
The head choice I’ve gone with is one sculpted by ‘Eleven.’ For me, I think the paint job is more in the style I prefer where “less is more.” I’ve seen some other head sculpts that are drowning in detail washes or too many coats of paint. I also think the sculpt is decent even though some of the overly painted ones actually have a better head sculpt. It works, it’s in scale, and I’m satisfied. I’m sure at some point a better one will come out, and then I will swap it out.

Body:
Under the clothes is a basic Hot Toys True Type regular body. It’s the right proportions and can hold a lot of great poses. I also used the extended ankle pegs to boost his height a little since he is a tall guy. I’m also using gloved hands from the Commissioner Gordon figure.

Outfit:
How hard is it to find a good suit? Very, actually. There are a ton of suits on the market, but to find the one that drapes well and sits on the shoulders nicely is actually a bit daunting. You could use the skinny body to make the suit look good, but cheap parlor tricks aren’t my thing. So finally earlier this year a black suit was made for a “Master Ninja” and I opted to use it. It’s not completely screen accurate at all, but I like the design and it fits well. On the inside though, I went with a black shirt that I had in my bin as opposed to the dark purple shirt that was included.

Extras:
The cane/sword completes the look, but finding a good one is hard to come by. There were a number of customizers who did some small runs, but like I said, I was late to the dance and missed out on getting any of them. I did manage to obtain an unpainted and disassembled version which was really nice and well made, but I’m not a good painter and even worse when it comes to putting things together. Luckily along came another company called HPC Toys that released a deluxe set with a head sculpt (it’s nice, but I prefer the one I’m using), a cane/sword, a gas mask and a nice accessory box. The cane/sword is really nice on the outside, but the blade has me worried. It’s basically a cut sheet of thick sheet metal and while on the surface that’s fine, it’s a tad rough around the edges and very pointy at the tip. For my purposes the sword will stay in the scabbard because I don’t know what kind of damage it could do to any unsuspecting figures. A smidge bit of sanding would’ve been appreciated.

Overall I like how it turned out even though I’ve seen some others that were amazing. I’m satisfied and that’s enough. 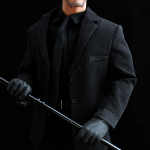 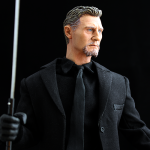