I have a love/hate relationship with Medicom. They used to be a company I really liked because they produced some really nice things. A long time ago. These days, I’m not impressed. At all. They seem to rely on their name recognition instead of continuing to produce high quality items which is quite unusual for a Japanese company that has been around for a very long time. So when I got interested in their MAFEX line, I was hoping that they had turned the corner.

One of these days I will dedicate an entry to my issues with Medicom.

Maybe they’ve turned a corner, but I just don’t see it. When I saw the Batman figure I thought I would give them another chance after the awful Hakaider debacle. I thought maybe the smaller scale and with the majority of the material being plastic, Medicom might find success again. Sadly, the figure just isn’t up to snuff. It’s a good figure, it really is and is a decent representation of Batman at this scale, but it’s not great. 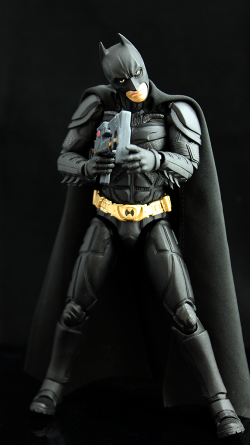 I’m a huge Batman fan, all the way back to the 70s when I grew up. I remember even having the cool Presto Magix rub-on decals and spending hours making a good picture. I never liked Robin so his pictures were rarely used unless he was getting beaten or something. Needless to say, when it comes to Batman figures, I have high standards and companies really need to deliver.

As a 6″ figure, he’s about as good looking as you can currently find of Batman in his Christopher Nolan design. The detail work is quite nice for this scale and is definitely an upgrade from the Mattel Movie Masters version. The head though isn’t that great and  passes for a generic Batman head. There is no Christian Bale in it at all. But I’m ok with that. He looks great and he looks of high quality but that’s pretty much where it stops.

I love the work on the armor and costume. It’s pretty spot on and they even have nice detail work in the carbon fiber plates. The belt is quite nice but you can’t attach anything to it. I think the armor plates are well done and it functions quite well. It’s the cape that irritates me. The cape is an extension of Batman and can really make or break a figure. In this case, it’s more a break. It just doesn’t sit on his shoulders well and it tends to puff up behind his neck. I’m not one those of that demand 100% screen accuracy, but his cape does have a ‘V’ cut at the collar and had this cape had it, it probably would’ve sat much better on the figure. It’s like they got the outfit just right, and then destroyed it with the cape. I don’t know how else to describe it.

There really isn’t much paint so this should almost be a quick win. And yet it’s not, as it has a substandard painting of the lower face. The eyes are also about as good as you’d find on a 3-3/4″ figure so I’m not sure why it’s this unimpressive.

In terms of the range of motion, it rivals most toys in the current marketplace. He has a large number of points and they tend to function very well… When it doesn’t fall apart. Subscribing to what seems to be a Japanese thing, the ball and socket joint used for the shoulders are weak which causes the arms to simply pop off all the time. I don’t know why they do this, but I see it in a lot of Japanese toys probably for safety reasons. Regardless, it just doesn’t work. The hips are also ok, but it just doesn’t allow him to stand nicely. His legs just don’t seem to sit in the hip joint as nicely as a Figuarts figure. Barring all of that, he can do some nice poses and looks great but I cannot overlook these cardinal sins. If he falls apart by standing there, what’s the point?

Batman doesn’t come with much and I keep wondering why companies don’t include a lot of accessories. He’s Batman for crying out loud. His gadgets are important. All you get are a set of assorted hands, a bomb, the EMP gun, and a stand. They could’ve included a sticky bomb gun (the one pictured is from the Mattel SDCC Exclusive) and maybe an alternate head or something.

This figure just doesn’t hold well together. His legs just droop out of the hip socket too much, and his arms pop off like that’s the way it’s supposed to be. The wrist pegs are also fairly thin so I’m expecting them to break someday. Medicom is releasing a version 2 very soon, but I’m not sure I want to try again. As they say, fool me once…

I applaud the effort but it’s not up to par in today’s world. It also doesn’t help that Hot Toys is releasing a similar figure that’s included with their 1/12 scale Bat. If the Hot Toys figure is great, and I expect it will be, a lot of companies will need to up their game. If I were working for other companies, their entrance into the 6″ scale would worry me and keep me up at night.

Notes: The Batpod is from the Mattel Movie Masters Collection. 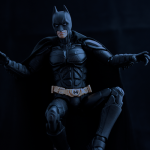 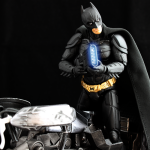 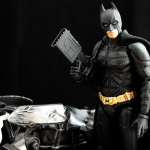 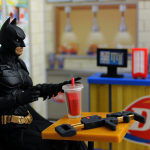